Q.  Here there!  What about all of The Sinister Dr. Fauci’s leaked emails? Over 3000 pages!  Who leaked them?
(I think this link is already dead...https://embed.documentcloud.org/documents/20793561-leopold-nih-foia-anthony-fauci-emails/) 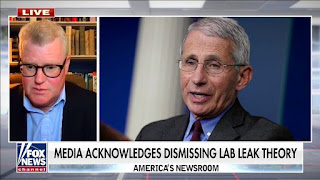 https://www.distractify.com/p/fauci-email-leak
https://in.finance.yahoo.com/news/dr-faucis-leaked-2020-emails-185419453.html
https://www.foxnews.com/media/leaked-fauci-emails-david-asher-investigator-wuhan-lab-scientists
A. When I focus on this, I get there is a person in the white house that is also considered a "White Hat."  They are playing both sides to make themselves accessible to privy information.  I see that when this beer bug first started some saw it as an agenda, and some bought into it this as a true "bug" based on the narratives that are floating around and the inability or unwillingness to open their mind.  This "White Hat" belonged to the former group and knew this scheme was intentional and created to cause problems for the administration at the time.  It was basically a "game on" situation.
I see that when this "bug" first happened this "White Hat" worked with or on the security team (and still does so I don't want to describe them).  They knew of the interactions between Fauci and China and saw the lie that was being perpetuated.  The issue was they needed to get concrete proof in a way they wouldn't get suicided should the information coming to light.  I see this leak was literally two minutes of key strokes, and sending this info to the right person.
A perfect situation presented itself in which the emails could leak AND be put into the public.  The time feels right for an awakening and opening more eyes. I also see this person has isolated themselves in a way that feels protected.  The MSM will try to take a dismissive narrative, but the positive of this is that it will plant the idea of the truth behind the origination of this "bug."
Even though this will be played off, I do see Fauci losing credibility and will be less and less in the public eye.  I look for him to "retire" and have a new person take over.  Rather than severely punish him for his misleading information, they will just replace his with someone else that takes a slightly different narrative.  The people will know it is a coverup, and sadly those that are in a deep left leaning way of thinking will believe more of the lies.
And that is all I have for this reading.  Please feel free to leave a comment and share your thoughts.
Interested in a Personal Reading, Distance Reiki or Life Coaching Session?  Click the tab above for more info or to schedule.
Join me on Telegram!  Channel:https://t.me/psychicfocuslynn  Chat:https://t.me/joinchat/VKm7n1RLdcGhcnf0
Please check me out on the following platforms:
Rumble  □  Brighteon  □  BitChute  □  GAB   □  YouTube
Free Podcasts: https://anchor.fm/lynn-white6
My book is now available on Amazon   Psychic Focus Journey
at 12:53 PM

These Revelations about Faux-ci and the recounts going on in several States seem to be the Overture to a dramatic crescendo of a major correction course away from Bidet & Co. Thanks Lynn for pointing out that sometimes political moles work for the Good Guys as opposed to the many backstabbing snakes we've learned about over the last four &1/2 years.

There was a recent report that Faux-ci bragged to colleagues at a bar he made 10 million in 2020 and expected to make many times more of that this year. He got two houses bought in his wife's name in foreign countries and a double is doing his interviews. Look at this Fauci on CNN June 3: https://www.youtube.com/watch?v=X4jFqlwoma4 and compare it to the real guy who stood near Trumpet in 2020 and was grilled by Rand Paul May 11, 2021: https://www.youtube.com/watch?v=2MndwrOzDvo Real Fauci has larger ears that stick out and a long snooty nose that makes him look like a rat, the double seems younger and having less ratty caricature features with smaller ears that don't stick out & less deep set eyes.

@Robert: Thanks so much for sharing! I love your comments!

Could someone explain to be what is this email leak in short summary? I read through one of the link and also Lynn's answer but is utterly confused.

Did Fauci know that the USA was the people who releaseed the bug onto the world?

Hey Lynn you are still my favorite psychic blogger. Keep up the good work. Been following you for years!