Q.  Greta Thunberg- What are your thoughts on her and her climate activism? I have heard that she is a puppet...Is she sparking a revolution of awareness? Is climate change real...or the natural evolution of Earth? Are we at the beginning of our extinction? 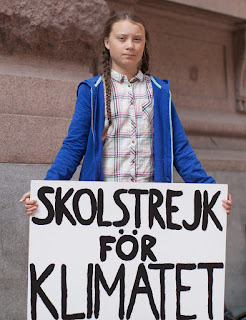 A.  When I think about the climate, and the fears being propagated, I get it is just that, FEAR.  Earth is massive, and she knows how to cleanse and purge what needs to happen.  Yes, there are man made factors at play, but in the BIG picture, man alone cannot evoke, change, or stop a climate change that is in full force.

During the Ice Age, people didn't trigger it anymore than cow farts trigger it now.  I see the climate is changing, the sun looks hotter (and emits a brighter white light), the seasons are shifting, and drastic weather patterns appear.  Some is manufactured, but the major cause is due to the magnetosphere being pulled on by other planetary bodies which shifts our own equilibrium.  No amount of grounded planes or cars off the road will stop the shift of true north which effects weather streams and currents in the ocean.  The force is too large, and one things has nothing to do with the other.


I get that the very left leaning people have enlisted Greta to pull on emotions, spread fear, and try to wins votes.  There is A LOT of money to be made on going "green" and implementing these ideas.  Taxes can be imposed, government funding can be requested, and newer "ideas" (GMO, chemical based food, etc) can be tested.

If you want to do good to the earth then meditate, send positive energy, help lift the collective consciousness, but don't contribute to the fear.  If Mother Gaia wants to cleanse herself, she will, and the change we are talking about will take many human lifetimes to accomplish.

To view free public posts, videos and discussion, please view any of the following platforms: Brighteon
BitChute
YouTube
YouTube BACKUP ChannelGAB
at 5:45 AM

Whether she's being used or not, I feel sorry for Greta, that she is living with such fear, such hate. She should be enjoying her life.

just take her personality at face value very toxic and it's nothing to do with autism. it's just an act to advance the Deep State globalist agenda

Thanks Lynn for the reading as always. There is lot of indication of something major to go down in mid October as U.S. military has been mobilizing troops and reserve units inside USA for some type of major event:-

1) The Call Has Gone Out, Military Planning Strategically Boxed In The [DS]

Do you see any thing major happening with regard to take down of Cabal in month of October or anytime soon? Thanks.

Brilliant. Could not be a more fortuitous time to share this information. Currently, brainwashed youth, my own age, who have conformed to a vegan, extreme left wing, climate change extremist lifestyle, are occupying and disrupting key arteries of Melbourne this week, and they don't even know this little girl, nor her family's handlers. Just another conspiracy to distract the NPC sheeple. We will never see what the elite do in plain sight, unless we get off social media, discard our smart devices, and use our intuition instead. Thanks so much again for providing your precious time Lynn!

I don't think that we contributes to climate change as much as the media suggests we do. It's a cycle that repeats itself, just like many other things in nature. I read online that her mother is an actor. I wonder if her mother trained her for this role to promote herself and Greta. This girl should not be manipulated and used as a political tool for adults. She should be enjoying herself, spending time with her friends.

Well said, Lynn and others.

I'm getting really tired of our irresponsible, uninformed, thoughtless and/or globalist-shilling media engaging in celebrity worship of a this young girl. They put her on a pedestal and bow down to her and then wonder why the skeptics come out against her. Meanwhile does anybody remember how the media defamed the Covington boys by spreading a false narrative that those kids were smug racists? I agree with Aussie Jim - people need to get off social media and learn to use their innate powers of intuition.

I'm sorry to get off the subject. In South Africa Grootslang is a legendary snake that stores jewelels (most of them are diamonds). It is believed the snake takes jewels rather than kill someone. The Grootslang will eat you alive if you try to steal from the cave.

You would think it would be impossible to get the jewels while the snake was gone because it is supernatural.

Has anyone been able to retrieve jewels from the cave without getting attacked by the snake?

This kid is a fraud and a hypocrite shilling for Soros' Deep State globalist agenda. Worse than that, her parents are members of the Antifa in Sweden. If she were really against climate polluters, she would be holding rallies AGAINST her demon-emperor puppet master Soros and all the destructive corporations he owns like Monsanto-Beyer.

I've also becoming more and more aware how toxic the green movement has become and how many people buy into it. They're restricting themselves more and more of their own free will.

Lynn, if you have time and feel guided, could you please do a reading about China? Their influence is everywhere now and I wonder where it all leads in the future. World wide communism?

Thank you for all the great comments!

@chris: Agreed. She is being totally used to create this propaganda. It is really sad.

@Robert: Thanks for sharing. And yes, this is total propaganda.

@Neeraj: Thanks for all the info and sites to check out!! I have heard about this too, but I don't see a MAJOR take down as described. I feel some things happening, but nothing on this scale. The PTW are most always up to something, but it is getting harder for them to pull it off.

@Serene: Interesting... and yes, not a surprise. They coach these young kids to prey on emotions of the masses.

@Raymond: I agree. Check out Serene's comment. She has a link to exactly what you are referring too. So sad the way they use these kids.

@Denise: Intuition is so important. I couldn't agree more that we need to use our intuitive filter and quit being "programmed" by all this stuff.

@uanymous: Wow.. interesting question. If you go to the Request tab, feel free to leave a question for the blog, and if you have any other things your curious about, please feel free to ask that too. :-)

@mycale: Thanks for the comment. I have touched on China before, and yes, you are right, they are rising (which has been their plan for a while now). I will definitely look at it.

@unanymous
That's interesting. In Swedish folklore, dragons are considered as guardians of treasures.

@Robert Schohen
Can you give a source to support your claims?

It is a socially constructed agenda. You can't turn anything on without hearing the same old leftist terminology. Who are the owners of the "green" corporations? When I was in school we had acid rain and the ozonlayer. It is the same thing. But the majority of the people don't want to wise up.At least they invented a new term it's not carbondioxide but nitrogen.
Even this native american chief said it: this earth doesn't need any humanbeings, it can heal on itself.

I agree that what they do is called emotional manipulation.

@serene I listened and the video says activist not actress