Q.  Lynn, Quick question.  Recently the New York sky lit up blue.  The media reporting felt odd to me.  The "official report" was that a transformer blew.  There are a lot of theories out there that say there was more to it.  What is your take?  Thanks. 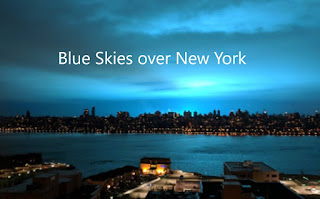 A.  When I tune into this, I do get there is more to this story.  This isn't the first, or the last instance of an "transformer blowing" or a very unreal looking sky.

I get this blue color is a result of electrical charge combined with metallic components in the air.  When I focus on these metallic components, I see an image of chemtrails and the finite chemicals are floating over the city, just as you would see dust floating in the air from a sunlit angle.

It appears that there was some kind of HAARP activity in an attempt to facilitate some kind of weather response, (I always see images of children controlling this, knowing enough to be dangerous, but not enough to fully understand the magnitude of the controls) and the experiment went array.  Not only did they over-seed the atmosphere with too many metallic components, the supercharge beaming of HAARP created too much heat, which allowed the metallic components to attach to one another (like a wire), creating a conduit for electrical energy.  Basically, this allowed the transformer to short itself out.  Then the heat and fire that occurred lit up the chemicals that were still floating in the air, giving the blue glow effect.

Until they get a better handle of this (which is still one thing controlled by the deeper state), I see more of this happening in an effort of master weather technology.

I was wondering about this too! I think this “oops” also backfired on the deep state cuz it caused a mass awakening for people, esp citizens in New York. There are talks about aliens and people are posting memes all over the place. I actually made a meme showing the blue skies tweets next to a picture of dragon ball z.... when he goes super nova ish and creates a blue ball and then it shoots up into the sky. LOL. When is trump going to notice this and put an end to it??

Lynn thank you. There was a transformer blow out on dec 27 in kenner louisiana then on dec 28 centurylink went down and the states that have it got notices of 911 emergency calling outages. This went on all day in many places. Are these two events linked?

Thanks for this read Lynn, the same night near the New Orleanms airport there was another strange sparking event around 3 am that was suspiciously photograhed by pro cinematographer who happened to be right across the street from its start as the electrical arcing and explosions went down a boulevard for half a mile. It is very cool to hear your read on this New York event as overdoing chemtrail HAARP weather control, but this other event in Kenner LA was different.
https://www.youtube.com/watch?v=IY1c-NZPh8A
timely
Coincidentally I came accross this post today in which the second comment by "Van Helsing" offers tremendous technical info on the DEW lasers and the large planes needed to deliver them.
https://www.youtube.com/watch?v=aTSKnBnAfHc&t=118s
Van Helsing wrote, "direct energy weapons do not emmit light beams. And they take up an entire 747 and a380. They cannot fit on helicopters yet. I work in the industry. Im trying to stay within my limits of discussion while dropping hints. The YAL-3 is an aircraft that is classified. It is an a380. Look up the YAL-1. It was used on September 11th. The dates of service are incorrect. I serviced this aircraft in 99 all the way to 2008. The tech has gotten smaller but to actually create destructive abilities, they added more, so as the tech got smaller it still took up an entire 747 and a380 to make destructive levels of power. The YAL-3 was used in california fires but nobody has it on camera because its rays are invisible. This isnt mars attacks lol the green light on the helicopter has to do with temperature recording. Attack helicopters cannot operate in extremely hot air. So they use the weapons locking systems to measure temp, as this is part of weapons avionics. However, it is not a type of target system that would lock for other weapons. I know thsts where your minds went lol so as you guys see things happen.... do not look for laser beams... u will not find real evidence. This theory has caused people to see glares as laser evidence. We pride on invisible direct energy, you cannot see it in smoke, or fog. The laser pointers you use to play with cats, and dvd players etc, are different types of lasers. Actual weaponized direct energy isnt the same. You will not see light beams. Not only for blocking the aircrafts location, but also because light dissipates energy. Instead, buy telescopes, and look in the air for an airbus a380 with a few odd attachments similar to the YAL-1. Btw i am not suicidal, and im not making videos right now so that way i don't magically commit suicide. Share this comment please. If someone can get a picture of the YAL-3, above an event, then you will bring dark to light. This will cause them to stop certain attacks. The power surges in Kansas﻿