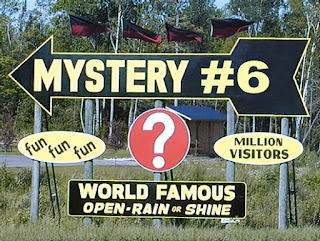 By Lynn & A Man Called Da-da

Welcome to a mind-bogglingly illuminating set of world famous Friday Mysteries. The front panel will close automatically. Remain seated at all times. Here we go:

1. Russian Bigfoot?
Is that really a Bigfoot chasing a car in Russia?? Here’s the video: 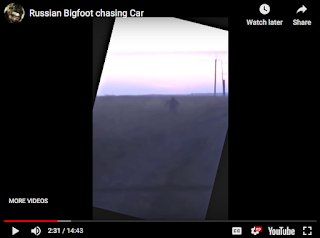 Lynn: That really is a Bigfoot. Normally I see them as spiritual beings; they don't feel aggressive. But this is a female Bigfoot and she's defending her babies. Something's happening there on the side of the road, like an injury to one of her kids, so she was trying to invoke fear in these people to make them go away, allowing her to get her family centered and their vibration raised. They can raise and lower their vibration at will, but the injury to one of the Bigfoot children made it difficult to do this quickly, so she chose to feign aggression to keep the humans away. Bigfoot are basically beings from another dimension. They're (rightfully) afraid of humans. 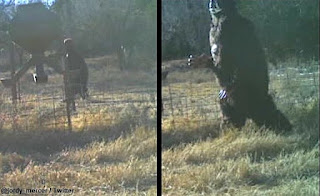 These odd images are from a trail cam owned by Jordy Mercer, a shortstop for the Pittsburgh Pirates. What goes on here?

Lynn: I'm getting that this is also a Bigfoot... but... I get that when this image was taken... if you were there, you wouldn't have seen this. Whatever frequency this thing was emitting, it was only viewable on camera.

Da-da: And this bigfoot primarily appeared here to get a tryout with the Pirates.

Father Jacques Marquette was the first to record the existence of this animal in writing in 1673 (the pic above is a recreation, the original was destroyed). On their voyage of discovery down the Mississippi River, Marquette and fellow explorer Louis Jolliet saw the following near present-day Illinois: 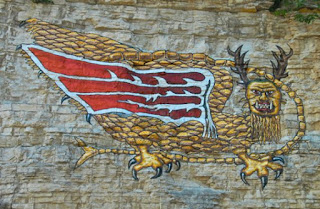 “While Skirting some rocks, which by Their height and length inspired awe, We saw upon one of them two painted monsters which at first made Us afraid, and upon Which the boldest savages dare not Long rest their eyes. They are as large As a calf; they have Horns on their heads Like those of a deer, a horrible look, red eyes, a beard Like a tiger’s, a face somewhat like a man’s, a body Covered with scales, and so Long A tail that it winds all around the Body, passing above the head and going back between the legs, ending in a Fish’s tail. Green, red, and black are the three Colors composing the Picture. Moreover, these 2 monsters are so well painted that we cannot believe that any savage is their author; for good painters in France would find it difficult to paint so well, — and besides they are so high up on the rock that it is difficult to reach that place Conveniently to paint them. Here is approximately The shape of these monsters, As we have faithfully Copied It.”

Was this just a fanciful Native American painting, or based on some cryptid?

Lynn: I keep seeing myself at the zoo and different animals there. The natives saw something that was big, moose-sized big, something unique to that area. The pic was painted on a rock as a warning to travelers about this animal, but it was embellished to make people more afraid, to emphasize the warning. Come to think of it, I actually think this was a moose they were originally afraid of. 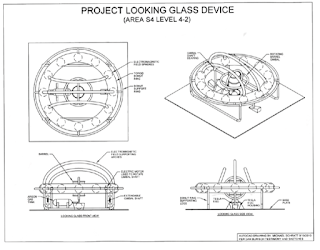 So, is there really a “Project Looking Glass” that the PTW uses to see into the future? If so, where did they get it and where is it?

Lynn: This is so weird. I was just looking at this for my latest Patreon post  Yes, there is a project like this. They've tried to use it to manipulate the future. But people on the good side AND bad side have use of this tech. The problem is, they don't know which timeline they're looking at and can't reliably use it the way they want to. People also get really sick working with this device, because of the energies involved. They developed it out of a military project, an extension of Montauk/Philadelphia experiments. But they can't figure it out.

Da-da: The good one and the bad one. Or is it the same one?

Lynn: It's the same one; output depends on the “user.” 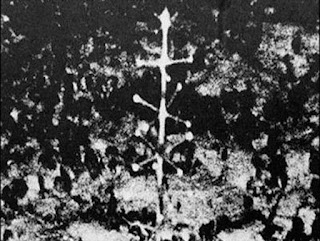 5. The Eltanin Antenna
This thing was photographed on the bottom of the ocean near Antarctica by researchers aboard the USS Eltanin in 1964. What is it and who put it there?

Lynn: I see a ship there at one time and a piece of the ship broke off in a storm and it sank to the bottom. Some kinda directional antenna for a surface ship. It's been there since the late 1800s.

So, this is definitely a weird sound, alright. Is this some animal? Or a vending machine with a problem? 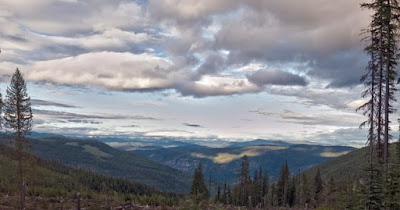 Lynn: That was no animal. I saw a ship going in and through a portal. (!) There's a portal nearby. I think this was some Pleiadeans just "going home” through the portal, repeatedly.

Lynn: There was something superweird about it... like the vibration was really high. It was not typical at all. They were traveling to a high dimension.

Note: While these sounds seem spooky, they aren’t without precedent. Check out the radio signals that the Cassini spacecraft recorded while orbiting Saturn:

And that’s it. Join us next time for a (Mooseless?) Friday Mysteries #7. You never know. 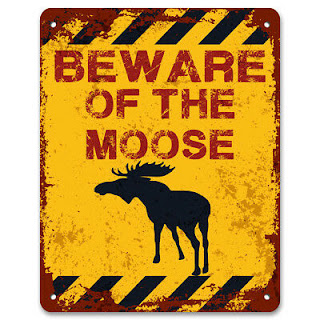 What a great set of mysteries and I Was particularly impressed by how the fantasy warning painting of a creature inspired by a moose was so similar to the monumental Assyrian portal sculptures of Half Men half bulls with wings. maybe this chimera is part of our Collective consciousness.

Cell phone & car cameras will inevitably bring more images of Bigfoot but of Ambiguously poor quality, which is lucky for them. I also really enjoyed the video of the sounds of Saturn, and how it is linked to the mysterious sounds of a portal opening.

Thank You DaDa & Lynn for Friday Mysteries Series absolutely love this series. How Bigfoot are able to raise and lower their vibration at will? How Portal works? What sort of technology do Pleiadeans use for opening portal? I find this topic "portal" very interesting. According to you which Sci-Fi Movie or Tv Series accurately describe portal?

Thanks Lynn! BF essential words Diccionary made by Janice Carter who lived on a farm when young and once got saved by a BF from a mad cow on a meadow. https://www.bigfootcasefiles.com/bigfoot-language.html

During the cold season BFs used to sleep in an old barn next to her dad´s house
https://www.bigfootcasefiles.com/50-years-with-bigfoot---photographs.html

It would be a lot of fun working around the "Looking Glass".
It would be interesting to jump into a time machine and enter a new era, but I wonder how they determine where and when you exit.
But, it would be a lot of fund to go a hundred years in the future and learn about current events in our era and how our lives played out.

Thanks for the comments! They were a fun set of questions.

@Neeraj: Bigfoot understand how to work with frequency, and alter their own frequency. Portals work on frequency too. Most everything in our Universe is a combination of magnetism and frequency (even our own bodies).

Wonderful post! Lynn, how or who gave "them" the info to build such machine? Are the aliens aware of it?

@Neeraj! Actually Lynn reproduces a somehow romanticized assessment! As one can see in the second link shared above, Janice Carter reports that she got abducted by another BF at a young age, but the other members of the clan brought her back to the farm. In a thread Janice Carter commented recently about other BF clans in Northern Carolina stating: "However some are rough or more primitive if you like, and they are cannibals, they eat their dead and even kill other tribe members and eat them. I only ran up against one group of these cannibalizing type at Lake Jordan in NC with other researchers at the time. Needless to say I'll never go back to that area, there isn't enough money in the world to pay for me to do so. " As it also happens among humans, there apparently also is good and evil. ;)

Thanks Lynn & thanks Watch for your comment. There may be few species of Bigfoot who are not highly evolve. Moreover I follow few people who are in contact with these magnificent beings namely - Kelly & Kewaunee Lapseritis, SunbowTrue Brother & particularly Sasquatch Ontario (Mike Paterson). Mike Paterson is being contact male sasquatch name Nephatia, he is been documenting & sharing the contact through his YouTube channel Sasquatch Ontario. Find Below few of the videos from his channel:-
1) Sasquatch Sings (RARE authentic Sasquatch audio capture)
https://www.youtube.com/watch?v=SXxQ2JSIn4Q

2) Discussions From Another Realm (Verbal communication with Sasquatch)
https://www.youtube.com/watch?v=QbDr8vQHF6I

You may also check the documentary series Sasquatch Speaks:- https://www.youtube.com/watch?v=M6iduWmgKFo