Q.  In Sunspot, NM they did an evacuation.  The Observatory has been blocked off with yellow tape.  Can you see what is going on there?  Thanks.
https://www.kob.com/albuquerque-news/telescope-did-not-see-aliens-but-sunspot-mystery-continues/5069947/?cat=500

A.  I received several emails on this, and wanted to take a look at it.  I did read the brief article above to better understand and tune into this situation.  As I tune into this, I feel like everyone wants to look up to the sky (I mean this is an Observatory), but I actually want to look underground.  As I remotely see myself there, people that have physically come there are looking upward, trying to see if there is something in the sky or near the sun, but I have the emotion that I need to back up and look down at the ground (as if I want to look "through" the ground at something beneath it). 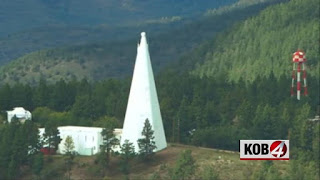 I get that the Observatory is sort of a "cover" for a bigger operation that is going on.  It looks like there is some kind of underground base or testing that happens, and the is Observatory placed upon it.  Think of this as a "mini" area 51.  There is a lot of UFO activity in this area, so the Observatory also serves the purpose of being able to watch what is going on above as well.

As I look underground, I get there is a fairly large study of ETs going on.  I hear the facility needed to be underground for security and also to dull the ability of other ETs to sense what was going on (and possibly come for a rescue). I see they had some ETs that look to either be frozen or perhaps deceased (they are floating in water).  I also see another that looks to to be in a glass cage.  The being looks to be a grey, and fairly submissive (then I hear the phrase "not by choice, but by force"). It looks like many tests are being done on him (I see what looks like some kind of patches on his head that can send / receive messages wirelessly).

It looks as though there was a breach in security that allowed the Grey to escape.  He really is very intelligent, and should not have been underestimated.  When he escaped and made it outside, he was able to "call" a fellow ship to get him.  At the time of the escape, people were evacuated and they closed down the Observatory in fear of a retaliation.  I get this location is monitored remotely, as they feel some kind of interaction is imminent.  I see this facility being closed for a while until they can be sure they are safe and secure.  When it finally reopens, I get there will be a "remodel" with enhanced security and upgrades.

Please send some positive vibes to this area as it feels like some low vibe activity was occurring.


(After reading through some comments, I did want to add that I did realize that there have been other closings of observatories all over the world.  I get that this event has possibly started something, and created a beacon for other ships to come here.  The being that was captured and held underground was somewhat powerful, and "they" are worried about who or what is coming.  I see this as a subtle start for disclosure.)

And that is all I have for this reading.  Thank you.  Love and light-

Link to REAL.Video Channel (Reading and Discussion): https://www.real.video/channel/yourpsychicfocus
Link to BitChute Channel:  https://www.bitchute.com/channel/psychicfocus/
To further support the blog or my video channel, please visit me on Patreon. (Thank you Patrons!)

Hi Lynn, I was one of the other emailers on this.. just wondering if you saw the video by Gina and what she was able to capture with her cell phone (I had provided a link but don't have it now) - egg shaped huge object and what appears to be ships all around.. i was asking questions about what those could be. Now having read your insightful reading.. were those related to this grey being having called for help? or something more?

Thank you. Fascinating info. Would have been really cool if the et was able to find shelter and someone could make a video. Wanted to follow up on the reason for many other observatories around the world also being either shut or the feeds being cut right around that time. Would they all have captured images of ships coming in? Why were they also involved?

https://www.youtube.com/watch?v=uJvCjBvL4a8&t=1392s
Kent Dunn confirmed what you have said this morning in an interview.

This makes total sense. It's a fascinating vision. Can you imagine if the grey made it out far enough to get spotted by the general public? A bit more disclosure is in order maybe. Thank You Lynn!

Interesting reading! NASA is still lying to the world that they are still looking for alien life in another planet while they are doing horrific experiments on the aliens.

Such a sad commentary of what we will do to them if they crash or try to make contact....take them prisoner and perform experiments on them. we are not evolved at all :(

Are you sure about this readings?

I read in another site, that at least 6 more observatories where shut down around the world more or less at the same time than this one?

Alos there is Gina Marie Collins, an amateur solar photographed that has reported a massive object near the sun

Is this simply a smoke screen to cover for the real issue here?

Or could it be possible that the solar activities are some how related to the E.T. escape?

Usually when one reads about alien abductions and medical experiments, it's the aliens doing the abducting and experimenting. LOL, turnaround is fair play.

Interesting read... Rex on Leap Project said they were moving the obsevatory to Boulder at the end of this year or the beginning of next year, all before this happened. They found the body of a hiker there today on one of the trails. The FBI would be an group to have shut down the observatory. Although it would make it more look like someone was spying on White Sands Missile Range as Linda Moulton Howe suggested...

Also the other six observatories that were closed weren't really closed. They just have really old webcams that they don't even sell anymore and some don't work. I think they're upgrading and their websites are opening online.

Okay! so... this was completely NOT what I thought the explanation would be! LOL but cool nonetheless! thanks!

Hi Lynn and thanks lots.

Just to second what has been brought up above by @Hulsie and @Adolfo, about the apparent closure of the other observatories and regarding Gina Marie Collins photos of alien craft near the sun, are these events in any way connected to the closure of the NM Observatory too?

Link to Gina's Facebook page where she posts her photos:

kind regards & best wishes to all.

If aliens are telepathic, I wonder what kind of conversations that they have with the people supervising them under Guard?

What do they eat to survive in custody? Do they eat food like us, or do they breathe chemicals?

The so called object around the sun is a misdirection--COINTEL/PSYOPS. Link that to the rumors the web observatories of the sun are being shut down to hide it, and that this observatory herein questioned is closed in relation to that; so also the other in the world. See Suspicious0bservers on YouTube. There is no such shut down nor near-sun object.

Lynn is on target here. There has been some serious skullduggery and experiments with these ETs, and they are finally getting out. Couple that with the gradual but accelerating disclosure about how fraudulent, traitorous, and seditious our DoJ, Intelligence, and Mil have heretofore been, there is disclosure everywhere, including that of ETs. The SHTF.

I don’t know why, but I cried when I read this... I felt so sorry for the grey in captivity.. to be experimented on and.. oh gosh. I’m so happy he was able to break free and be rescued. I feel the same way when I watch a video of an animal being rescued from a terrible situation. I know some people view the greys as hostile but that’s lyrans for the most part. Greys are considered our “parents” and care about us. I wonder which grey this was.. short or tall? Man, I’m tearing up again thinking about him getting outside, I’m sure he was so happy to be free at last.

@R L, I believe the only time someone should be held "captive" is if they committed an action that is not lawful and even then, the individual in question should be treated with dignity, etc. when held in confinement.

Hi everyone! Thank you for the comments!

@Hulsie and Craig: I do see the closures everywhere related. I even did a little "blurb" at the end of the blog explaining this. I felt this grey was very powerful, and when he was able to escape and call for help, it was and still is quite possible that a fleet is on their way. The observatories don't want to create chaos, and are shutting it all down.

@adolfo: I do see it related, and a forced disclosure feels to be sooner rather than later.

@Patrick: Thanks for sharing! I know some people (including me) may want to check this out.

@Raymond: It is telepathic, and much is done with brain waves. I hear the phrase "ocular implant" so perhaps it is translated into something mechanical???? I get it is based around concepts and trying to understand technology. Very business related versus personal.

They do need nourishment, some is obtained through their skin. They also need a certain spectrum of light. They also look to eat, but it doesn't appear to be the traditional "food" like you and I would eat...????

Thanks again everyone. Very interesting reading!

If Aliens are thelepatic, and wants to guide us, why don't then provide technical guidance to smart people so we can have better technology?

Q just admitted aliens do exist and that moon landing was real. Any thoughts on this?

actually those other observatories were not closed - their camera's have been offline - for months. some of my reader's pointed this out to me (as i first believed all were closed at the same time).

@adolfo: I do get they try to do that. The challenge is for the "receiver" to understand the message, and for those in power to not try to infiltrate the message as well. (think about the holistic doctors...)

@ken: I'm not sure how he said the message (I believe there is a lot of truth in Q's messages). ETs are real, but the moon landing was a Kubrick vision (based on what I've been able to see).

@MamaT: I did hear that earlier in the year as well. They do not want people to "see" what is really going on in the skies, but the closure of the NM observatory was the breaking point and things are going to get much more intense.

Here's what the latest "official story" is on the observatory closing: A Federal search warrant of a janitor's laptop attached to the observatory's wifi led to the closing for "security concerns". https://www.ktsm.com/news/local/el-paso-news/child-pornography-reason-behind-sunspot-observatory-closure-according-to-court-documents/1460386237


I would love to know the truth about this as well... Hope it's just a cover up story....A sick cover up story though! Still doesn't explain why people nearby had to evacuate from their homes though.