Q. Thanks for all that you do!  I know you did a reading on Jim Carrey back in 2014, but is he having a spiritual awakening?  It appears he may be indicted for murder ( his ex-girlfriend ).  Is this a ploy by the PTW to take down another wealthy person becoming awake and a potential problem for them ? 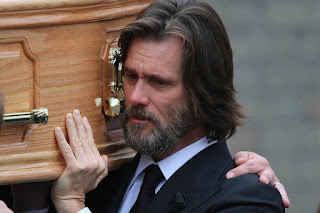 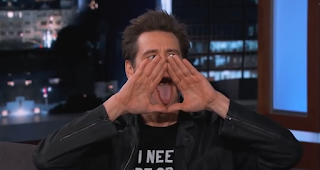 A.  I do see he is awakening, and been awakening.  He sees things for what they are, and he feels disgusted by it.  He is trying to open others too, and it scares the PTW (Powers That Were).  He knows too much, and bought into the agenda at first, but something in him changed and he couldn't do it anymore.

He has been giving little clues to the public, saying "off" comments that make people think.  Those that are already awake realize what he is doing, and those questioning things are left curious.  After the Jimmy Kimmel show (pic above) in which Carrey did the all seeing eye symbol with his hands, the PTW really put him on their radar and knew he needed watched.

To keep him in check it was decided to cause legal trouble, and paint him to be a person he is not.  The PTW needed to discredit Carrey before he says or does anything too detrimental.  I hear that the PTW is masterful in "damage control."  His ex-girlfriend felt like some kind of sacrifice (I see a white rose which means sacrifice in my mental dictionary) to emotionally and publicly hurt Carry.  This looks really tough for Carrey to overcome (lots of time, energy and money will be spent), and it looks like in the end he will be ok.  I hear that to the PTW the outcome isn't as important as the struggle he will have to endure during the process.

Please send some love and light to her and her family.  Carrey could also use our support.

You are wrong about Jim. He is the head of the satanist church in LA. He h

He has been acting very strange and saying things that have a hidden message. I hope they do not take him out. Thanks for posting!!!

@Bibi: I'm not sure I connect with that (I could be wrong??). I googled it and I almost felt like that was something fake just to hurt his reputation for trying to speak the truth. Not sure how I feel about it..

Instead of trying to figure out what is true in the news, I just listen to the people speaking and your intuition tells you whether they're being truthful. I literally don't need to know anything else, it's all just details. When Jim Carrey speaks (right now) you can feel that he says everything with conviction like this IS his truth.

I remember years ago watching an interview of a mother who supposedly just lost her son in the Sandyhook shooting and my intuition was just screaming at me that this person did not lose a child. I didn't know why I felt this way , I didn't know any details yet but I knew that she was not truthful whatsoever. I'm thankful every day for intuition, Because if we went with only what we're told , forget about it .

Hi & Thanks for this reading, I also don't see Lynn getting something wrong about Jim Carrey! :)
Russians and US are going to colaborate even more in space! They plan to build a moon orbiting space station soon! https://translate.google.de/translate?sl=ru&tl=en&js=y&prev=_t&hl=pt-BR&ie=UTF-8&u=https%3A%2F%2Fwww.roscosmos.ru%2F24136%2F&edit-text=&act=url

Yes! Jim carrey is woke! That's the word people are using and I'm so glad someone in the Hollywood biz is speaking up like this! Lynn did you see his most recent interview... VERY interesting!! I was cheering him on as I watched this. https://m.youtube.com/watch?v=qN6gSYh6hSM

@ Beloved & Shiningstar thanks for sharing!
Lynn's post is on RMN here's the link (http://www.rumormillnews.com/cgi-bin/forum.cgi?read=84483)

My feeling about Jim Carrey is that he's someone who has suffered with depression, which inevitably leads to a lot of soul searching and truth finding.

@A Fox - Agreed. When I'm listening to the news, I immediately get a sense whether people are being truthful or not, and that's what often prompts me to do my own investigating (i.e., Sandy Hook aka Hoax).

@Watchand Knock - The recent announcement about Russia and US collaborating in space is very interesting! Can't wait to see what comes of it.

Thanks again for the comments! I do agree that we just have to listen with our intuition and you will know what is truthful and what is less than truthful..

@Watchand Knock: That is interesting! Thanks for sharing!!