Q. Is there any meaning to dreams at all? Especially recurring dreams about someone or something? Or is it really just the brain trying to cope up from a day's work? I've been dreaming about someone I know in the past every once in awhile lately even though I rarely think of them in my daily life. It really got me curious.
A.  I get an image of someone meditating, and during that meditation they "doze off" but the meditation continues.  My impression from this image is that dreaming (many times) is a way for the body to meditate or connect to the subconscious, but it happens during a sleeping state.

Q. Do dreams have a meaning? 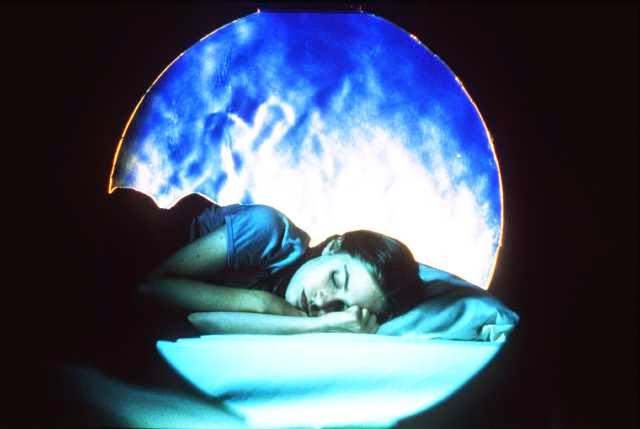 A.  They do have meaning, and that meaning can vary.  And that meaning may not make sense (just as some images we have during meditation make no sense, but offer clarity later).  I also get that rather than try to break down a dream into individual parts (for example a red bird = x and snow = y, etc) look at the dream as a story and see how it parallels with your life.  A red bird or snow may mean something completely different to different people- One person may feel love at seeing a red bird, while another may be thinking of Christmas.  It is the same image with two different takeaways.  I also get that dream books can offer good advice (and be very thought provoking), but look at your life and situations you may be in when you assess the true meaning of a dream.

Q. Do all dreams have meaning, or can some be random?
A.  All dreams have some kind of purpose.  You may experience a sunny day in a dream which has nothing to do with a dilemma, situation, etc in your life.  Not only does sleeping connect with you subconscious, but when your brain is discharging at night it may need to process emotions.  You might have had a great day, and as some of the joyful emotion is processed you visualize a beautiful sunny day.  Dreams can result not only from an action or experience you had or need to do, but from emotions and feelings as well.

Q. What causes recurring dreams?
A.  When I tune into that question I hear (rather sternly) that there is a message being relayed and the receiver isn't listening.  It is as if during that dream there is some action that needs to take place and until you do it, you will continue to have the same dream.

If the dream is regarding a person, first, analyze why you are thinking of them.  Is it a past love you miss (and need to consciously process those feelings)?  Is it someone that wronged you (and you need to forgive)?  Is it an old friend that you wish to reconnect with (and haven't done it)?  Or, maybe there is a change you need to make in your life that is in your greater good.

If you dream about something else repeatedly, you still need to look at your life to interpret the meaning.  Do you dream of flying (and in your physical life you experience restraint or feel limited) and want to feel free? Maybe you drive down the same road (and in life you are stuck and need to pick a different path)?

Dreams can be powerful and insightful when you look at them.  Your conscious mind can rationalize things away, but your subconscious holds the truths.

And that is all I have for this reading.  Thank you.  Narrated reading to be posted on YouTube.
at 7:13 AM

Dear PF, we had much discussions earlier on dreams.I always wanted to differentiate between sleep & meditation. How do you see the difference?

Speaking of dreams... Lynn, do you see anything happening tonight, say at 8:00 pm EDT? Something global and cosmic? Or has Da-da just been at the Sacramental Wine again?

@a2k: When you meditate you are putting yourself in the same "frame of mind" that you feel when you are in the first stages of sleep. You quiet the rational, conscious, part of your mind and allow the subconscious part to "speak" to you through images, words, smells, etc.. They are similar with regard to brain activity, but in meditation you are more aware of your surroundings (and more easily distracted) from the message or experience.

@Dada: There is some kind of energetic shift going on... It feels like a new awareness or birth of something. I also feel like an internal purge will be happening.

When I was a kid I had recurring dreams about my mom driving down a road with me in the passenger seat and opening her door and jumping out while the car was still moving. I also had one about me riding a bike through my neighborhood but at some point I couldn't get back home because I'd just keep passing the same areas.

Recurring dreams are almost always about something that is very stressful or important to you that is not being resolved. Sometimes those things don't seem so important but once you resolve or move past them, you will stop having those dreams.

I don't have any recurring dreams now but I have noticed that a lot of times when I run in a dream, not always but most of the time, I run like a gorilla where I put my arms out, grab the ground to propel myself forward, swing my legs up, and continue that process. I don't really know exactly what that means but I'm working on it.

I also wanted to say that I had a dream a year or two after my mom died that I was at Six Flags, it's an amusement park, with her and some people I used to go to school with and at some point I couldn't find her (my mom). The schoolmates and I split up to look for her but no one could find her. The dream ended just after we had all regrouped and I realized that she hadn't been found but the important part is that when I woke up, my alarm radio was playing See you on the other side by Ozzy Osbourne. The exact lyrics that I heard were "Oh yes I'll see you, see you on the other side".

@Alpha X: Thanks for sharing your story!

I know you did a reading on Robin Williams awhile back. I once had the strangest dream that I was in a big city and a taxi cab pulled over. The driver had strange, unusual eyes; they were violet. Sitting in the back was Robin talking animatedly to another fella whom I had the feeling looked similar to the late Richard Pryor.

When I asked if he was really Robin and told him he was dead, he turned to me and he seemed to acknowledge that he is dead, but when told me this he looked just like Mrs. Doubtfire. When I got into the taxi, his face went back to normal. We talked. I had no clue what, but we had a serious conversation about something. We hugged, I got out of the taxi, and as the taxi ambled along, I saw a strange, unearthly white lite that appeared as a crack in between time and space. The taxi drove past it and disappeared.

The weirdest thing about this white light is that it still lingered even after I woke up. The feeling coming from the white light was warm.

AS for Richard Pryor, I am not a fan of his. The same goes for Joan Rivers, yet she also was in my dream last night. I wonder, can spirits communicate through dreams?

Excuse me, "light", I have a bad habit of typing fast.