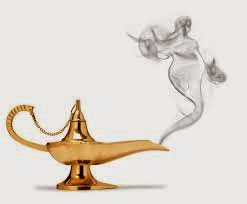 Q. Hello, wanted to know, are djinni's or genies real? http://en.wikipedia.org/wiki/Jinn Did they really exist and do they exist even now? Do they really grant wishes? What are they (eg angel, spirit, alien, etc)? Thanks
A. They do exist, they just reside on a different layer (or realm).  These type of spirits (as I see them) look very positive- almost like a spirit guide.  The difference is that I don't see them as a guide that is assigned to you by the universe, but rather you call these guides onto you based on your intent and what you are trying to accomplish (or your guides can call upon them for certain goals that align with your life path).

To better explain this, I see these beings working in alignment with the Law of Attraction.  For example, say someone has a life path of being a musician.  They have a passion for music, and feel drawn to it, but have never had a break or great opportunity.  This person may work hard, meditate, wish or hope for clarity and direction (all forms of intent)  That person's spirit guide may call in "help" from other beings (referred to as djinni or genies) to make things happen or align.  In a sense they do grant wishes, but it is more though intent and allowing the Universe to work.

Q. Can you take a look at the following video and give some insights as to whether or not it is part of the system. And what it is doing.https://youtu.be/SoOLZacJ7Bk
A.  I do see a lot going on that NASA isn't telling us.  I get the red comet is visible on the western side of the sun.  I can't get a clear connection to the planetary body in this video, but I did not see it as the red comet that is part of another solar system entering our system.  I also cannot confirm that this was an authentic clip (it didn't resonate as real to me).

Q. Hi Lynn, there is a mysterious stone tunnel in a town not too far from me and no one has a clue who put it there or how long ago, although it is estimated to be quite old. This is the best page I could find with basic information about it. I'd love to hear your thoughts and finally solve this mystery!! Thank you! https://www.facebook.com/media/set/?set=a.631862213495945.1073741842.556606251021542&type=1
A. I keep seeing images of a root cellar.  It looks like some sophisticated area created to preserve food for the winter and protect the food from disease (insects and other molds/fungus).  I get that food kept above ground spoiled (and there was a threat of disease ??), and it needed to be kept in this cold environment.  I see these tunnels lined with herbs, dried meats, fruits and vegetables.


Q. I enjoyed reading "Angels in my Hair" by Lorna Byrne [http://www.amazon.com/Angels-My-Hair-Lorna-Byrne/dp/0385528973/ref=sr_1_1?s=books&ie=UTF8&qid=1427222046&sr=1-1&keywords=angels+in+my+hair+lorna+byrne] who has interacted and seen angels all her life. She writes a lot about personal guardian angels and how they want to help us. In these times, with so much chaos and conflict on earth and above, I wonder if you have any sense of how angels fit into mediation and ET issues.
A. There are different beings outside of our daily experience on earth.  ETs are beings that are mentally evolved and have capabilities of communicating telepathically- both on earth and off.  When we meditate these physical living beings are able to communicate with us mentally. They can advise on events and explain things / concepts.

Angels and guardians are of the spirit world. The terms can be interchangeable, but they work in the same way.  They are of the higher vibrational ranges, and work in a person's best interest.  These beings are more focused on the person, connections and life paths. They can advise on the more universal issues, but they focus on how it is relevant to the person and their growth.

Q. Can you explain what is actually happening in this video?: https://www.youtube.com/watch?v=naRbAiy-Hp0
The Lviv Pogrom of 1941. Here it seems pretty clear-cut that the Germans are guilty.
A.  As I watched the video (I would need it translated to english for a complete understanding), in my mind I kept hearing "who is the propaganda for" as if I was watching a commercial that they needed me to believe.  Then I got that if something was truthful, they wouldn't need to convince me because I would already know it to be true.

Then I asked myself about the Lviv Program....I get there was an attack there (in Poland), but the people that were killed were a combination of Jewish people, Germans, Polacks, and Russians during a battle.  I get the reportings are not accurate- who was killed (there were many countries involved), the number of Jewish people killed (the figure given was a total of all nationalities) and why they were killed (I get there was some kind of Russian attack in that area and the reporting of it was turned around to support a different agenda).

Germany was not innocent in the war, but they did not cause it.  At the time of WWII, Germans loved their country, the country was thriving and their economy was turned around- The strength of this country posed as a threat (because other countries may follow the lead), and that is the real reason they found themselves in a war.

Q. Every time I look at the childhood photo of co-pilot Andreas Lubitz here - http://www.dailymail.co.uk/news/article-3019802/Girlfriend-Germanwings-crash-pilot-says-knew-psychological-issues-optimistic-okay.html
I think "murdered" which implies to me that he was a victim along with everyone else on that plane. I'm interested what you see. Was there a greater influence than Lubitz's own depression/suicide?
A. I do not see him committing suicide.  I still see the air as not being "normal."  There was an atmospheric condition or anomaly with the magnetosphere that caused this "thin air" that they plane could not fly in.  [I have also been asked about CERN, but haven't been able to confirm anything..]  I get it is easier for the media to lay blame on this pilot (and essentially set him up after the fact) than to cause panic(and worry with every airline) and explain the anomaly with the air.

Regarding the Djin(Genies), in Muslim religion they believe Satan to be a Djinn and that Djinns can be both good and bad, male or female. They also believe them to be made of smokeless fire and to also be the beings behind the evil going on in this world especially concerning the Anti-Christ whom I think they refer to as Djaal (?)
Is there truth to this?

Lynn, this might be a good time to teach people how to ask for the greater good-type being, rather than the trickster popping in there. Even advanced people get fooled!

@They Live: I see they get called upon through intent- in the perspective I saw they looked (or the ones I saw looked) of higher vibrations and aided people. I feel like lower level vibrations are called something else...

@Dada: You are right... Intent and remaining focused is very important. Good advice I got early on my path was when you see someone or something, ask for it to identify itself. For example, if you see a passed loved one, ask if they are who they present themselves to be- if they say anything other than yes to your questions, ask them to leave. Entities will manifest in various ways to communicate, but don't allow them to do it under a false disguise. If you tell it you are not communicating with it, it will leave.

Lynn, it sure takes integrity to stick to the WW2 readings, if ever there was a modern version of heresy, that would be it. Is there ever going to be a time when questioning the official Nazi story will become culturally acceptable? The whole fake moral underpinnings of the way Western society is run today, seems to rest on a corner stone of the system "saving" us from Nazis. It sure would go a long way if folks knew it wasn't what they were told.

Wonderful and courageous! I so love you for being truthful no matter what.

Yesterday I saw a facebook page made by the family and friends of the pilot telling he was not the person they are trying to picture and that this is a Lufthansa plot to get away with their fault.
Is so sad to be a scapegoat of History. But then I think, in this cases, were you put on earth for that? Was it part of your destiny?

As I said before, I'm a newby in this whole ET thing. I'm still not getting the family tree here. The spirit world has nothing to do with the ET world? My guides are spirits or ETs? When I meditate, who's on the other side of the line? Or do ETs have spirits/souls too that go somewhere when they die? Is it the same spirit world than ours? Oh Lord I thought I had my whole spirituality so figured out!

Lynn I would really like if you could do some reading on Virgin Mary some time. I know she's not very popular overseas but for our culture she's a rock, a real pillar.

Besos!
(I'm so happy with this blog you people can't imagine)

Are they called demons? Many thanks as always!

Thank you for the comments everyone!

@Juli: We communicate with all things both on the other side (spirits, guides, angels) and on our same side, but worlds apart (ETs). We are all connected by the same source (the universal consciousness or oneness) which is why this connection is able to happen.

I do see we are destined for certain purposes, and some we cannot understand until we are on the other side...

@They Live: Lower level beings do exist, and we have labeled them as demons. There is some truth, but the fear tied to the name gives power to them, and as humans we really are really more powerful... It is sort of an illusion that we allow to play out- we really are stronger than any lower level -being. Media is what tells you otherwise (don't listen to it).

@master: I see conception two ways- one- through natural means of reproduction, and two- artificial means such as fertility treatments (both modern and in experimental means that the ETs used).

Hey Lynn, what is your belief about Jinns or Djinns? The kind of ones from Islam Religion?
Are they real?