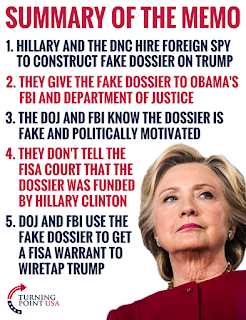 I know political posts are sensitive.  I've been asked several questions surrounding the following topic, and I decided to finally tackle it.  I respect everyone and realize this may evoke some emotions.  Please take a breath as we continue on.

Q. This is regarding the controversial "classified memo" detailing the FBI surveillance on Trump (or a guy named Page who was in the campaign) before the election. I've read it and have tried to read through the complex background on this, but still don't know what's the truth.  Now it has become this thing where democrats say it's nothing, and republicans say it vindicates Trump.
This all started with opposition research on Trump, basically trying to dig up dirt on him and derail his campaign. But, the "dossier" of negative information on Trump gathered by a former British spy (Steele) and funded by the DNC, was given to the FBI and they asked for and received permission to surveil .  (In an abrupt way the steps are outlined in the diagram to the right).

The question is, is any of Steele's information about Trump's dealings with "Russia" have a basis in truth?
A. I do not see any basis.  I get that there was a lot of embellishing to support an agenda to bring down Trump.  I get there were shreds of truth that were contorted (like there were real conversations, but the content of the conversations were speculation and not truthful). Steele was masterful in taking a situation, applying bias he was paid to have and relay that information as fact.

Q. Does Steele know the truth, or is he just a pawn caught up in political strategy?
A.  He does know the truth deep down, but he was paid to wear (I hear) "rose colored glasses" to form his opinion.  I see him like a pawn that allowed himself to be hired as just that, a pawn.  He didn't see this "project" like a pawn when he started, because he didn't see the scandal getting out and he was paid well to take the risk.  I get in hind sight he sees this situation much differently now.

Q. Ultimately, did the PTW (Powers That Were) orchestrate this whole thing to bring down Trump?
A. As soon as I put that question out thee, I get an immediate "YES!"

And that is all I have for this reading  Again, I know political posts can be sensitive, so be be mindful of that in the comments.  I am happy to address further questions / comments below.  Thank you.  Love and light-

Link to PsychicFocus on YouTube:  https://youtu.be/9Hr8IqCbsyc
If you would like to further support the blog, please visit me on Patreon.
at 7:57 AM

They tried to take him down, but rest assure, it will end up the other way around.

I hope Steele and the other guilty parties get their comeuppance.

As always, "he who pays the piper calls the tune". That's all you really need to know about Steele and his professional fiction writing.

Lynn, is this the beginning of the PTW takedown? Seems no one to date has had the political WILL necessary to press actual charges.

It is not necessary to actually press charges against the PTW in order to make a better world. If people simply stopped cooperating, if people became streetwise about their agenda and refused to run their errands, it would be fully sufficient to make an impact on society for the better.

The base of their power is ultimately not money, but knowledge. As that very same knowledge is becoming more and more widespread among the public, that will be their true downfall.

Thank You for the work which you really do. Recently major events happened - Rothschilds sold property and other assets & Global Market Selloff after the nuke memo come out.

When can we the people expect to see major changes in our psychical reality?

@Neeraj Chadha
When people as a collective decides that they have learned every possible lesson to learn from the old world, and thus are ready to create something new, it will be manifested.

I believe all of us living in the world today came here to learn, through the difficulties present in the world. But there is only so much you can learn, and so much karma to be dealt with, and just as in school, sooner or later you will have to "enter the next grade", which in this case means manifesting a higher vibrational reality, because the difficulties and challenges of the old one will no longer serve our ascension.

I just listened to a program where the guy speculates this is all a smoke screen for some bigger shenanegans like pushing through 5g networks on everyone, which is much more harmful than what we're using now. Any truth to that?
I've been expecting another false flag to divert attention. Do you see anything more on the horizon? I think that train crash carrying a bunch of republicans was no accident!
Thank you- interesting reading!

@EnlightenedOne ~ I understand what you're saying, but I'm speaking of the "justice timeline." There, the rule of law needs to be reinstated, as without it, people of a lesser vibration may feel fear, while others may be tempted to again foment fear. I aspire to the timeline where this will not matter... if there will indeed be a main-timeline bifurcation.

Hi everyone. Thank you for the comments.

I do see this as the (I won't say "beginning" as it has been going on for a while) of the end.. The PTW are slowly being brought to the surface and being drawn out from their long hiding.

@Charles: I have been meaning to do a reading on this (5G network). This is a HORRIBLE thing for the people. You may have inspired me to pull some questions from my email and do it today or tomorrow.

@Lynn
Please do! It's an excellent and highly relevant subject.

Thanks for your insight, it make perfect sense. Thank once again.

I have been viewing the recent remake of the classic British TV series POLDARK, and found it fascinating to see how the greedy and blatantly evil banker-villain George Warllegan did everything within his means to destroy our hero Captain Ross Poldark.

Knowing the serpentine grip that Warleggan has upon everything in the region of Cornwall where the tale takes place, Poldark decides to unite with others of a good nature and attempt to fight the "deep state". Warleggan uses his powers to blackmail, buy off, or otherwise destroy Poldark's friends, but fails to get to Poldark himself.

Even after bringing Poldark to financial ruin, destroying his mining company, and creating an atmosphere of doom all around him, Warleggan still fails to bring our hero to his knees. Thus Warleggan takes the next step and uses his wealth to print countless hundreds of pamphlets falsely accusing Captain Poldark of every crime from thievery to outright murder. Spreading these pamphlets all over Cornwall, Poldark's reputation seems tarnished forever, as he is placed on trial.

Like Trump, however, Poldark withstands all these assaults and manipulations, and triumphs in the end. Of course, I do not say here that Trump is in any way comparable to the dashing, handsome, 18th century hero in any other way but his ability to stand tall under relentless attacks by his foes. There is something highly admirable in a man who is so spiritually sturdy and confident in his own principles, that he can withstand a seemingly endless series of attempts to tarnish his character and destroy his life's work and dreams.

Although I still prefer and always will love the original 1970s version, this fresh series is enchanting and well worth one's time.

Try not to get lost in the hall of mirrors of alternate timelines.
There are too many false, imposter Shrödinger's cats trying to lure you in...